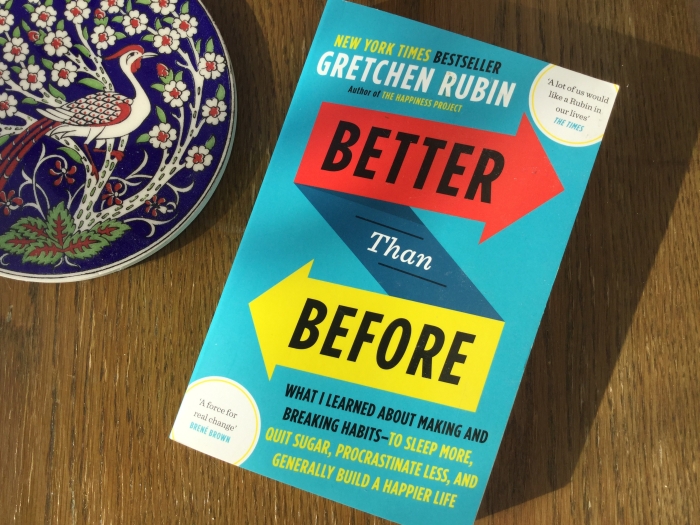 “There’s a great satisfaction in knowing that we’ve made good use of our days, that we’ve lived up to our expectations of ourselves.”

When I bought this book, struggling with the stresses of full-time work and study, I wanted a magical fix. I thought it would be easier to clean the house if I made a habit of certain aspects of housework (like emptying the dishwasher or hoovering). Everything would take less time, I would have a tidier house and less distraction from working.

As well as this, I wanted to make a habit of exercise – I never feel like I do enough. I was finding it hard to fit it in after work, so I thought I’d get up ten minutes earlier and go for a run then.

So, I was excited to start reading and become a new me. I immediately found Gretchen a little condescending – she comes from the approach of being Very Good at creating habits, so it doesn’t feel as though you are going through the process with the author, rather you are being lectured at.

Nevertheless, the advice was fair and I began the process of building these habits. I would be so cross with myself when I didn’t do them. That’s when I took a step back, and realised that the book had had the opposite effect – these habits weren’t making me happier or better, instead they were making me miserable and cross with myself.

When I looked at it a little deeper, I realised that I already have a lot of good habits – having a smoothie for breakfast every day, doing the food shop every Friday evening, doing a yoga session once a week.

Perhaps many of us need to congratulate ourselves for the things we’re doing well, rather than beat ourselves up for the things we think we’re not doing right. This is why I chose the quote at the top – perhaps our expectations of ourselves are actually the problem all along.

Better Than Before: What I Learned About Making and Breaking Habits _ to Sleep More, Quit Sugar, Procrastinate Less, and Generally Build a Happier Life

One thought on “Better Than Before – Gretchen Rubin”