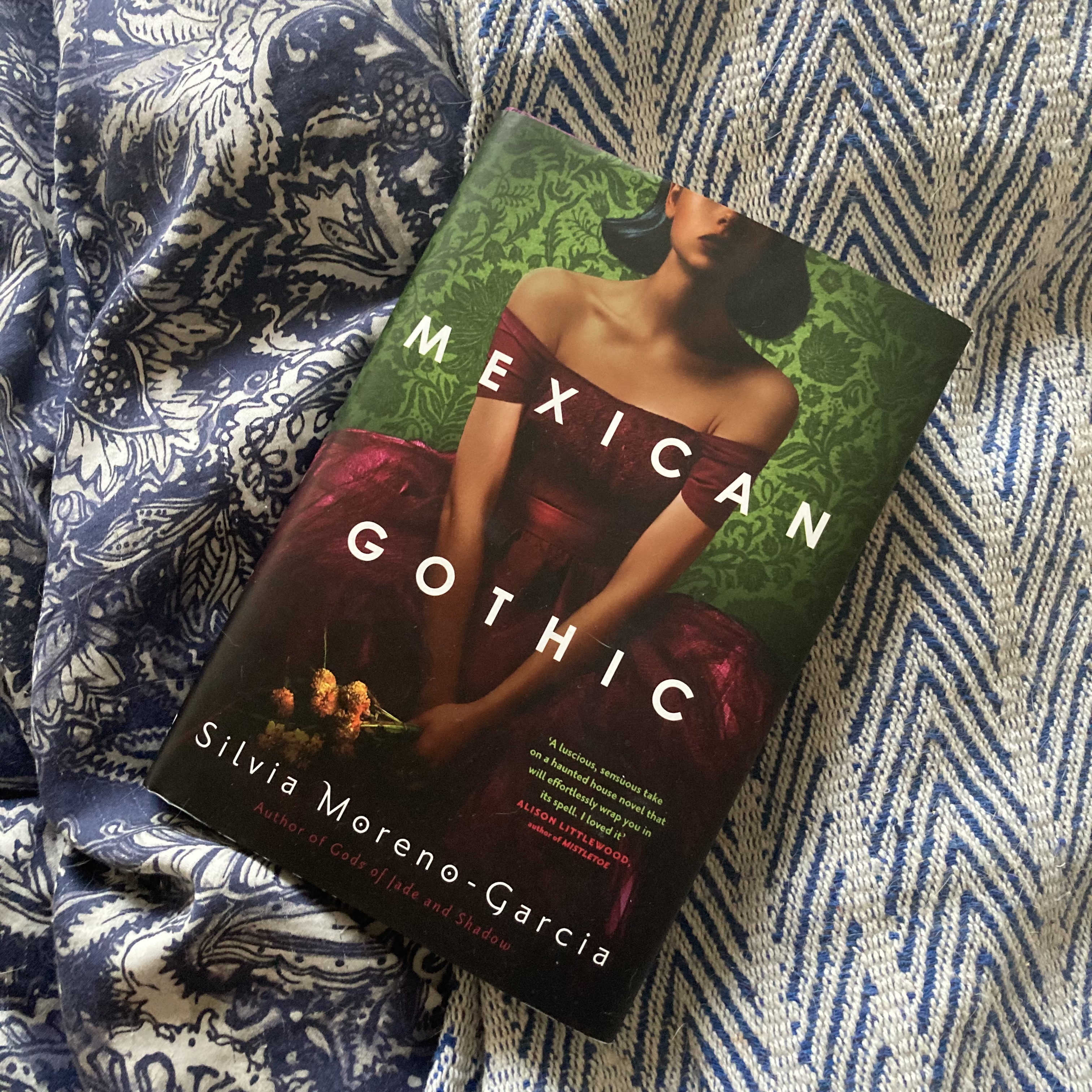 Ah, now this is exactly the sort of book I love to pick up. A creepy, energetic thriller with just the right balance of horror, intrigue and fantasy.

The beginning of the novel was similar to many haunted house stories – a young woman must visit an old house in the middle of nowhere. When she arrives, she discovers that it is decrepit, mouldy and its occupants decidedly odd. There are silent servants, lecherous men and a cousin who is acting anything but normal.

The protagonist is Noemi, a character that you can’t help rooting for. She is bright and fun and the perfect antithesis to the bleak surroundings, high in the mountains where the mist is a constant companion.

About halfway through, the plot veers away from that of a traditional haunted house tale and becomes something very different. It surprised me, but I loved it. The plot is imaginative and brave, and I am now looking up Silvia Moreno-Garcia’s other books (Gods of Jade and Shadow next, I think!)

You can find Mexican Gothic here.

A short story by Harriet Young

Blood appears black in the moonlight. Don’t ask me how I know that. There are many things I’ve done and many things I’ve seen that I’d prefer not to tell you. But I suppose, now I’m here, that I should share.

So, where to begin? I suppose you want to know everything, don’t you? Perhaps I should start with my childhood. How little there is to tell about that though. I was a loner – I imagine you guessed that already, from how I am now. An only child, distant parents. I can’t pretend that my difficulties, the trials and tribulations I’ve felt during my life, haven’t stemmed from then. In fact, until I found you, I was drifting. I had no anchor, despite my wealth. Oh, how I do now!

No, don’t worry, my parents weren’t cruel. But I can’t say that they showed me love either. They were busy, I felt like an afterthought. I found my own ways to entertain myself. I won’t bore you with them, ordinary childhood things that they were. Games.

I went to University a year early. I always was bright, but numbers come naturally to me. I was confused by how others struggled in those lessons, perhaps that goes some way to explain my lack of friends. I hoped things would be different at Oxford University. Surely there, there would be people like me?

As you know, I was disappointed. They had all of the benefits of a socialised childhood and they gathered in groups that I couldn’t infiltrate. I just didn’t know how – they weren’t like me. Instead, I went from lecture to lecture, head down, books in hand, talking to no one. I was invisible. I kept my eyes on the ground and studied in my room. I spoke to no one and no one spoke to me and that was that.

This may sound like I want your pity. I don’t. You know that since then, my life has become an apparent success. I have friends, fans even. My money. Status. But I’ve always wanted more. I’ve always been hungry for more. Now that we’re together, I’m content. You have changed that side of me, at least.

Yes, I know why we are here, having this conversation. Yes, I can tell what that expression on your face means. You want more. Well. I don’t know whether delving any deeper would be helpful. You already seem disappointed in me. What can I do? It is more difficult than it seems, peeling back the layers. As painful as removing a layer of skin. I’ll try. I’m flattered that you want to learn more about me. I feel there is something I’m missing though, something urgent that you want. You are tense. But you feel as though you can’t ask. Ok, that’s fine. I want you to believe in me.

A heart is like an apple, you know. When it’s healthy and happy it is fresh and juicy and red – filled to bursting. Have you ever bitten into an apple and left it on the side? Straight away it starts to wilt, brown, rot. There’s no healing it. That’s my experience, anyway. Give it an hour or two and there’s nothing you can do to save it, you may as well just toss it in the bin.

You could say that’s been my life’s work.

You don’t get the connection? You look confused, but trust me, it is a good metaphor. I can see your micro expressions now, flitting across your face, you are struggling to understand. It will become clear. I want what you want – I want the two of us to be happy and I want you to know me. I know that’s important for us to move forward.

Shall we move on to your reservations about me? I can see that you have them. People have had reservations about since I was a child. Perhaps it’s something about the way I hold myself. I’m so used to being alone that others sense that they are unnecessary around me, but that couldn’t be further from the truth. I need you as much as you need me. I’m sorry that I can’t be different.

Perhaps talking about my career will help. You know that I’m successful and – well, you’ve seen my office. You perhaps don’t know quite how hard I had to work to build my company. From the ground up. Starting with nothing – no loans, just a computer in my bedroom. Am I proud of what I’ve achieved? Yes, of course I am. Wouldn’t you be? I’m sorry, I don’t mean to undermine your own career. I know you work hard. But yes, to get to the bottom of what you want to know, I did trample on people on my way up. To be a success, you have to. Kind people don’t get anywhere in this life. Oh, I don’t mean that in a derogatory way, but you understand – to make millions, to become a someone, you have to stand on top of a pile of bodies. Excuse my crude phrasing. It was harder for me than those Eton boys with their connections readymade. I had to rely on pure talent and guts. You think I’m cold, and I don’t deny it. But you can see why I would be, with a life like mine.

Now I’m confused because you still seem to want more from me. There are no more relevant things that I can share about my life. I said it was freeing to be able to tell you anything and I stand by that, but your reaction is frankly quite disappointing. You have a strange look on your face. What is that look? If you came closer to me, maybe I would be able to decipher it. As it is, I am drawn to your glinting eyes in this gloomy room.

I see what you want. I understand now. You want to know about my past relationships. Are you alright? I noticed a subtle change in you. This is what you were waiting for. Well, I’m afraid there’s really nothing to tell you. I have never been much of a one for long relationships. They don’t tend to work for me.

I know that’s not the answer you wanted to hear.

Interview adjourned at 13.49. The accused remains unwilling to disclose the locations of the other bodies.

If you liked this, you can buy me a coffee by making a donation below. No pressure and it is certainly not expected, but each donation gives me the sweet caffeine I need to carry on writing. Thank you!

Or enter a custom amount

Your contribution is so appreciated, thank you.

Your contribution is appreciated.

Your contribution is appreciated.

“You are innocent until the courts have ruled that you are guilty. What kind of weird statement is that? Either you’re innocent all along, or else you did it, right from the start.”

I’d never heard of Malin Persson Giolito before I picked up this book, drawn in by its cover and a description of it as ‘The Secret History meets We Need To Talk About Kevin’. I was not disappointed- more than that, I was astounded.

I couldn’t put the book down. It’s one of those which hooks you in; I ended up cooking dinner one handed, the other grasping this book. Luckily, I avoided any serious burns.

The story starts with a high school shooting. The main perpetrator, Sebastian, is dead. His girlfriend, Maja, survives and we follow her trial as we try to establish whether or not she was complicit in the murder of her classmates.

Malin Persson Giolito has struck the perfect balance with her main character. She is not overly likeable, but I didn’t hate her either. She seemed naive, but as convinced about the definition of ‘true love’ as we all were at eighteen. From the outside looking in, we can see the huge flaws in her relationship, but it is impossible to say we would have acted differently when overwhelmed with the attentions of an older, richer and more popular man.

I won’t say any more about the story because the main enjoyment I got from it was never knowing what would happen next. Suffice to say, the description I had read prior to the book is an apt one and I immensely enjoyed the process of reading it. The accolade of ‘best Swedish crime novel of 2016’ is worthy and I’m looking forward to Malin’s next book already.

“Lonely’s like any other organism; competitive and resourceful in the struggle to perpetuate itself.”

Everyone knows Sebastian Faulks; Birdsong is an immensely popular novel (with good reason, it was impeccably researched and written with precision). I’m not sure if Engleby is as well known. I have no idea if people like it. I’ve never heard anyone talking about it.

But, to me, Engleby is one of Faulks’ best novels. There is less of a cinematic quality to it, and I prefer that – it is instead a story of a killer, written from his point of view.

We are taken on a journey into the mind of Engleby, a strange character. At first, he seems perhaps shy and anti-social; as the story moves on, his way of thinking becomes more and more disturbing and we start to realise that all is not as it seems.

Whether or not Engleby actually committed these crimes, I’ll let you decide. And as to the question of whether Engleby is ill or – more chillingly – evil and taking the reader for a ride too, well, I have drawn my own conclusions and you’ll have to draw yours.

An entertaining and readable book from beginning to end.